Virgil is SO lazy… At Aeneid 4.124 and 165 he even repeats the same line, with just the subtlest variation: the verb that completes the sense in the following line is in the future tense at 124 (as Juno predicts how she will bring Dido and Aeneas together) and present at 165 when the narrator recounts what actually happened.

It’s a very good line, however, and I for one am not going to take Virgil to task for it. It describes the moment Dido and Aeneas “discover each other” in a cave where they take shelter from a rainstorm, and Virgil exploits the flexibility of word order provided by an inflected language to create a textual counterpart of the cave, the names of Dido and Aeneas thrown together between the words for the cave, speluncam … eandem. There’s a clever delay, too, in Virgil’s introduction of Aeneas after Dido: the word dux, which will soon be matched with Troianus to make “the Trojan commander”, for a moment, falling before the caesura, attaches to Dido, leaving us with the shocking implication that Dido is taking the initiative in this relationship. Shocking, that is, to the male chauvinist Romans who were the first readers of this story. Virgil doesn’t do erotic awfully much, and maybe I’ve pondered this line a bit too long. But the intertwining of the the words for the two lovers in the cave? Latin lovers don’t need to be told how sexy an inflected language can be.

A final thought, though, on why the line is repeated, because I actually think this is a Virgilian masterstroke, too. When it first appears Juno is telling Venus how she will arrange everything. But it’s fair to say that between 124 and its reappearance at 165, we’ve rather forgotten the gods pulling the strings in the background. It has been an essentially human explanation of events that has led up to this moment. Then, suddenly, we encounter the very line with which Juno had predicted this outcome. We are powerfully reminded that humans are mere playthings of the gods, believing they are free agents but in fact doing the gods’ will. A moment of tragic intensity, and all achieved by repeating a line.

120-127
On them I will pour down from above a black storm mingled with hail,
while their horsemen are busy and are encircling the woods with their ambush,
and I will shake the whole sky with thunder.
Their companions will scatter and will be covered in dense night:
Dido and the Trojan leader will arrive at
the same cave. I will be present and, if your support for me is definite                   125
I shall join them in enduring marriage and shall consecrate her as his own.
This will be their wedding.” Venus did not oppose her request
and nodded, smiling at her discovery of the trick.

160 – 172
Meanwhile the sky begins to be troubled with a mighty
rumbling; then follows a rainstorm mixed with hail,
and the Tyrian comrades here and there and the Trojan youth
and the Dardanian grandson of Venus seek shelter scattered
throughout the countryside in fear; rivers rush down the mountains.
Dido and the Trojan leader arrive at the same                                 165
cave. Both Earth, first of all, and Juno, the matron of honour,
give the signal; lightning flashes and the Air, privy to
their marriage, and the Nymphs shriek from the topmost peak.
That day, first and foremost, was the cause of death
and evils; for Dido is not swayed by appearances or talk                  170
and no longer considers her love secret:
She calls it marriage – with this name she disguises her fault.

You can find a longer version of this article and more by Llewelyn Morgan here. 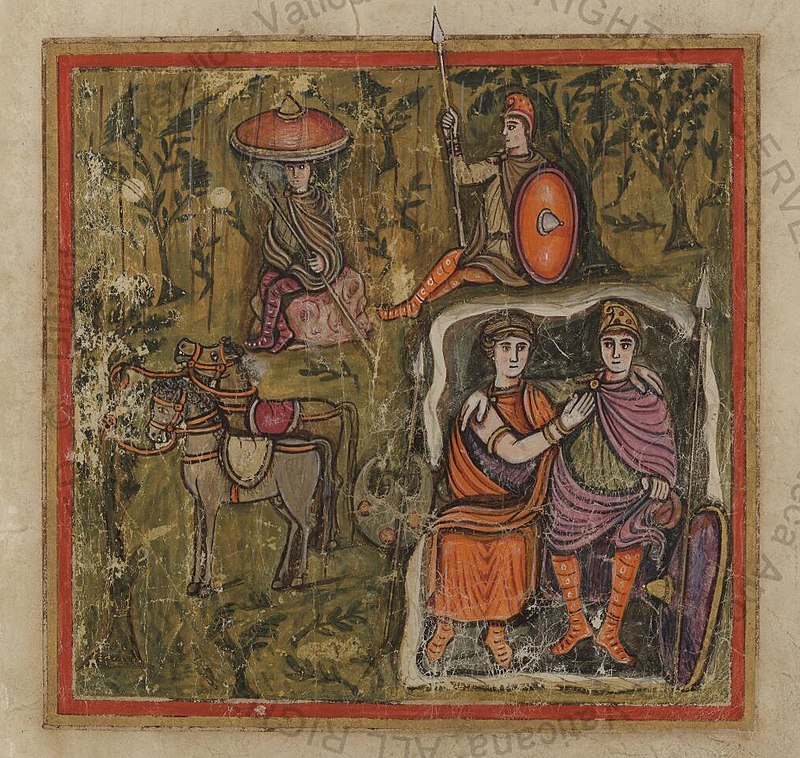 The above text is provided by the Perseus Digital Library and the translation is by Jane Mason.

Dido and Aeneas in the cave – from the 5th Century Virgilius Romanus, one of the most important and interesting Virgilian manuscripts.