Once he was back from the Trojan war, Clytemnestra killed her husband Agamemnon. Some years before, she exiled (or, according to another version of the myth, failed to kill her son) Orestes, born from their union.”Nothing else is more dreadful and more horrible than a woman who puts such deeds into her heart”, says the spirit of Agamemnon in Hades. (Od. xi, 427-28)
Entering the scene she appears ruthless, beastly and implacable. Her words meticulously describe the ravage of her husband and the physical pleasure caused by Agamennon’s blood on her body.
Because of her manlike behaviour, Clytemnestra is quite an unnatural woman; the watchman, in fact, defines her a ‘woman of manly counsel’ (Id.Ag.11) and the chorus claims that ‘ [She] speak[s] as wisely as a prudent man.’ (Id.Ag.351).
She even kills Agamennon with a double headed axe (labrys), symbol of the regal and masculine power; and no woman would have dared to wield such a weapon.
Even though Clytemnestra is a shocking character, not everybody knows that previously she has been a victim as well.
Euripides’ version about her life narrates that her first husband was Tantalus, king of Pisa, with whom she had had a child. The infant and the king were both killed by Agamennon, who captured the city and forcibly made Clytemnestra his wife. The rancour towards him became deep hatred when she got to know that her beloved daughter, Iphigenia was sacrificed under false pretences.
In the tragedy of Aeschylus, we are not informed of her past sufferings. What we perceive before our eyes is gruesome. Only the triumph of Justice will put an end to this endless chain of personal revenge, but not to Clytemnestra’s hatred.

I have said many things before for convenience,
I will not be ashamed to say the contrary.
In what way indeed could someone, arranging hostile acts against enemies,
who seem to be friends, fence round the nets of calamities
to a height too great for out-leap?
For a long time not unexpected by me this contest
of an ancient feud came, after a long time indeed:
I stand, where I struck, after doing so.
I did so, and I will not deny it,                                              1380
that he neither could escape nor repel death.
With a tangled net, like the one for the fish,
I wrap him, fatal abundance of a gown.
I strike him twice, and with two howlings
he collapsed his limbs; and on him dead
I add a third, as a votive thanksgiving to the God,
(who dwells) underground, protector of the Dead.
Therefore after he fell, trembling he draws his (last) breath.
And throwing out swiftly and copiously blood,
he sprinkles a black rain of sanguine dew on me,                1390
who rejoices no less than the sown corn (which rejoices)
at the rain, gift from Zeus, when the ear blossoms.
That being the case, that the august assembly of the Argives
may be glad, if glad they can be, but I rejoice.
If only it was possible to make a libation over a corpse,
over this one it would be just, indeed more than just;
This man, who filled in this house, a bowl of such hateful ills,
drinks it completely himself, once he has returned. 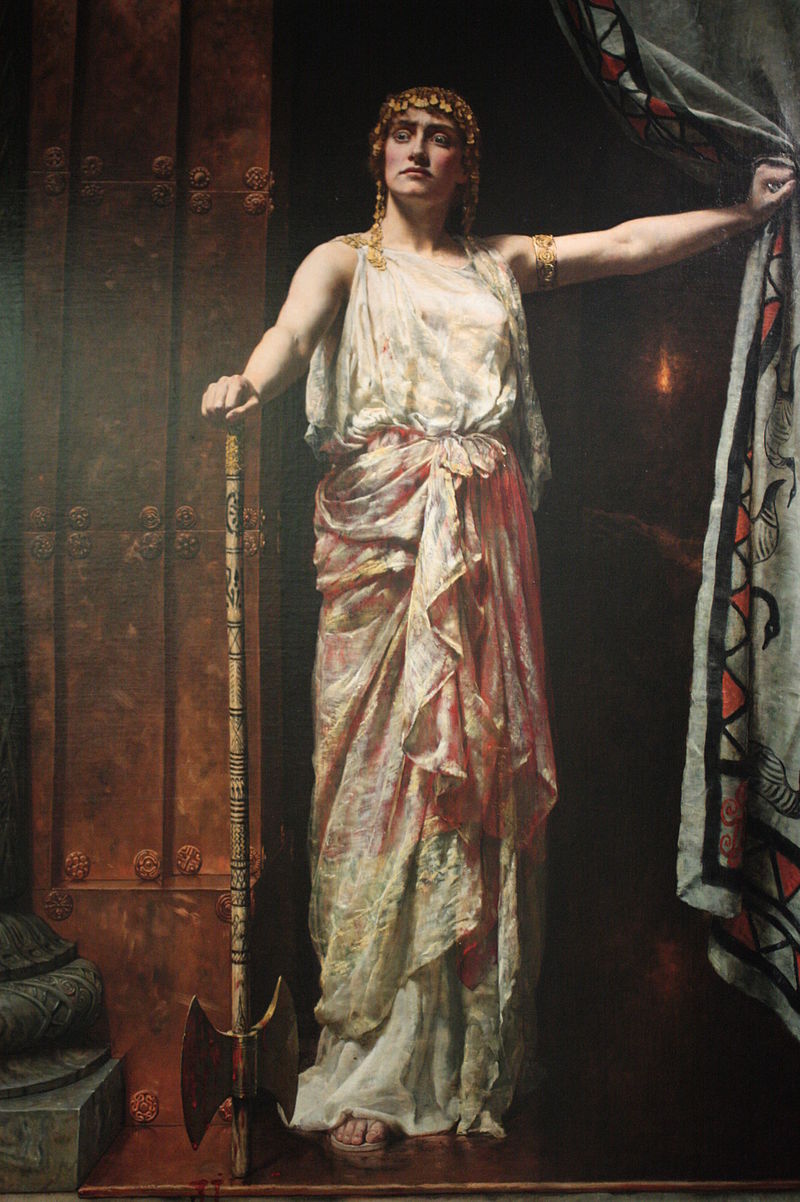